Not all grass-fed beef is created equal. Shire Beef is committed not only to producing high quality products, but doing so in a way that improves the land from which it comes.

Shire Beef practices intensive, rotational grazing management. Cattle are moved, often once or twice each day, between small paddocks within a larger pasture. Intensive planned grazing contributes to pasture and animal health by:

While increasing the demand for human labor, intensive rotational grazing improves soil and forage quality and sequesters significantly more carbon than traditional grazing practices. Holistic Management inspired planned grazing is paramount to success in implementing complex management systems with a lot of variables. We chart out how long the cows were in a given area (how many, how large an area), what the weather parameters (precipitation, temperature) were, so we can make better informed decisions and utilize the available forage better.

Pastures at Broad Acres Farm are steep, with some approaching 30% grade. Due to this geological reality, deliberate landscaping practices--grounded in the philosophies of permaculture--are paramount, particularly in regards to water management. In order to increase water permeability and retention, a swale and berm system was created throughout steep pastures. Subsequently, these areas were keyline plowed and daikon radish seed was planted into the furrows. This technique resulted in an increase in water penetration into the soil (from 8-12 inches to over 24 inches), leading to increased soil fertility. Root systems now grow deeper, leading to a healthier and more productive pasture. We have consulted with wetland and water resource experts from a variety of organizations to develop a water protection plan and establish buffer zones around the most sensitive areas. 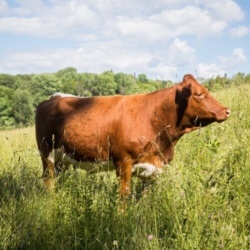 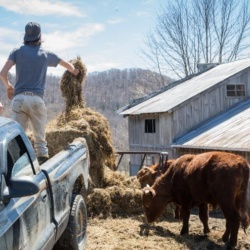 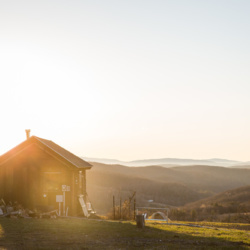 Shire Beef is located in the Vershire, Vermont, part of the Upper (Connecticut River) Valley corridor of Vermont and New Hampshire. Founded in 1781, Vershire has a total area of 36.5 square miles and a population of just under 650 permanent residents. Vershire is approximately 35 minutes from Hanover, NH, halfway between Boston and Montreal--just under three hours away from each--and around five hours from New York City. A town of farmers and homesteaders, Vershire is also home to The Mountain School of Milton Academy, a renowned semester program for high school students. With rolling hills and views of the White Mountains to the east and the Green Mountains to the west, Vershire is a classically bucolic Vermont landscape. The farm sits at an elevation of 1,400-1,800 feet above sea level. Vershire is home to the headwaters of the Ompompanoosuc River, which heads east to the Connecticut River where it turns south en route to Long Island Sound and the Atlantic Ocean.

Shire Beef combines two abutting properties--collectively known as Broad Acres--across 160 acres, approximately 100 of which is currently in pasture. Shire Beef is located on a portion of the former 1,100 acre Little Brook/Reed Farm, which was granted to Union soldiers after the Civil War. In the 1970s, the remaining parts of the parcel were split between the brothers Charlie and Conrad Orr. Through the mid-1980s, the farm was an active dairy, with the majority of acreage used for pasture and hay production. Shire Beef purchased Conrad’s parcel in August 2012 and Charlie’s in February 2016, reuniting portions of the original plot into a single unit and returning it to active farm management.

Vershire enjoys a relatively short growing season of approximately 115 days per year. Depending on the year, the grazing season extends from mid-May to mid-November. Compared to the national average, Vershire receives slightly more rainfall with less sunny days. The average high temperature in July is 80 degrees Fahrenheit and the average low in January is 1.3 degrees Fahrenheit, both lower than the national average. Soils are sandy loam with spots of ledge exposure, with a depth to ledge ranging from 2 to 12 feet.